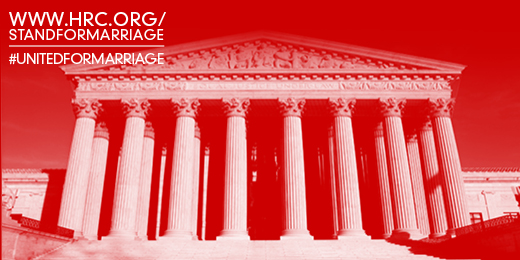 On Tuesday the 26th, the court will hear Hollingsworth v. Perry -- "Issue: (1) Whether the Equal Protection Clause of the Fourteenth Amendment prohibits the State of California from defining marriage as the union of a man and a woman; and (2) whether petitioners have standing under Article III, § 2 of the Constitution in this case."

On Wednesday the 27th, the court will hear United States v. Windsor -- "Issue: (1) Whether Section 3 of the Defense of Marriage Act (DOMA) violates the Fifth Amendment's guarantee of equal protection of the laws as applied to persons of the same sex who are legally married under the laws of their State; (2) whether the Executive Branch’s agreement with the court below that DOMA is unconstitutional deprives this Court of jurisdiction to decide this case; and (3) whether the Bipartisan Legal Advisory Group of the United States House of Representatives has Article III standing in this case."

In case you did not already know, dear reader, I am both a Gay Man as well as very Religious. I am a member of the Seventh-Day Adventist Church  which does not recognize a marriage between two members of the same sex. But that, in this particular argument, is completely beside the point. Why? Because...

Civics, as (please God) you should know, is all about your rights and duties as a citizen of the State (as in, the general civil government of a country, not as in The State of Wyoming). In the United States, there is no State Religion; our laws and ordinances may be guided by our personal, individual faiths (don't steal, don't kill, don't lie under oath, honor your contracts), but they don't take the tenets of a single faith and impose them on all citizens.

There are no religious overtones in this contractual obligation between the Unit and the State. The Religious ceremony, while often performed at the same time, is separate from the Civil act of formalizing the contract. The lines blur in the United States because Officiants are most often also Priests/Pastors/Rabbis/Ministers, but they aren't required to be.

Yes, it does bother me that my Church maintains a hold on on these archaic, chauvinistic, interpretations of (very proof-texted) scripture, which can be shown to be completely inaccurate through an objective and holistic reading of scripture, but as I said earlier, that's not the point. My church is allowed to disagree with same-sex marriage; that's their right, and I would never advocate forcing all Religious to perform or acknowledge marriages of those they didn't want to.

But it's not the marriage within a Church at stake here: it's the Marriage contract with the State. And in the United States of America, we have Equal Protection Under the Law, and SCOTUS has already declared, in Loving v. Virginia, that "classifications so directly subversive of the principle of equality at the heart of the Fourteenth Amendment, is surely to deprive all the State's citizens of liberty without due process of law."

The Defense of Marriage Act is Unconstitutional, and needs to be ruled as such. This is not, so called, Judicial Activism, this is the preservation of what makes up the core of the United States...