I created this character during the Beta, and recreated him when the game went live. Engineer is my homage to The Engineer in TF2 – a fact made even more evident by this character’s biography:

Everyone still calls him ‘Engineer,’ just like in his old team days. And that’s just fine by him.

I have a lot of fun with this character. I use two of the pets from Gadgeteering, the Munitions Bots and the Support Drones. I threw a few powers from the Power Armor set, only where it made sense, to add a little flavor. I can stay alive for a long time with this set up, so long as I’m not taking too much heavy focus fire, heh. 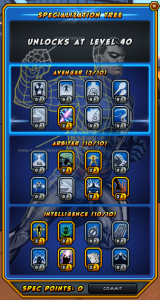